Crown Him Lord of All

This year is the Diamond Jubilee, celebrating the 60th anniversary of Queen Elizabeth II's ascension to the English throne. Her coronation was an event filled with pomp and pageantry as the crown was placed on her head. 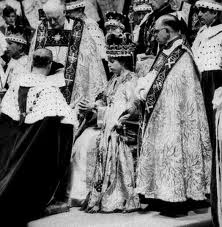 When Jesus ascended to heaven, God crowned Him, exalting Him to the place of honor and glory He earned by dying in our place.

But we do see Jesus, who was made lower than the angels for a little while, now crowned with glory and honor because he suffered death, so that by the grace of God he might taste death for everyone. Hebrews 2:9

If only we could have been in heaven on that glorious day! Imagine the pomp and circumstance then.

Do Christians forget about Christ's kingship? We understand and emphasize the fatherly love God has for us, and rightly so. He tells us to come to Him as a child comes to his father. But do we stand in awe of the Lord and remember with wonder what he has done for us? He suffered in our place, took our sin, bore God's wrath and triumphed over death. Because of this, we have confidence that on the day of judgement, we will be declared righteous and will not have to suffer the consequences of our sin. What a truly glorious thought.

Our glorious God humbled himself to the point of death and afterwards received the reward prepared for him.

6 Who, being in very nature God, did not consider equality with God something to be used to his own advantage; 7 rather, he made himself nothing by taking the very nature of a servant, being made in human likeness. 8 And being found in appearance as a man, he humbled himself by becoming obedient to death— even death on a cross!

9 Therefore God exalted him to the highest place and gave him the name that is above every name, 10 that at the name of Jesus every knee should bow, in heaven and on earth and under the earth, 11 and every tongue acknowledge that Jesus Christ is Lord,
to the glory of God the Father. Philippians 2:6-11

As if that weren't enough, his death purchased crowns for each of us on the last day. When that time comes, everyone who has ever lived, everyone of every race and culture and language will fall at his feet and acknowledge His kingship over us.What a glorious day that will be.

Imagine the rejoicing in heaven as all of God's people gather in His throne room and praise Him for all He has done for us. The human mind can't begin to comprehend what it will be like. Take the coronation of an earthly king and multiply it infinitely and you'll get the idea.

Those the LORD has rescued will return. They will enter Zion with singing; everlasting joy will crown their heads. Gladness and joy will overtake them, and sorrow and sighing will flee away. Isaiah 51:11

Email ThisBlogThis!Share to TwitterShare to FacebookShare to Pinterest
Labels: All Hail the Power, kingship