The Story of "A Mighty Fortress Is Our God" 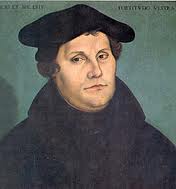 Martin Luther, the great reformer, wrote this hymn in 1529, some 12 years after he posted his 95 theses on the church door in Wittenburg, Germany. Some describe it as the "battle hymn of the reformation" and it certainly has become the hymn most easily identified with the protestant reformation. Since that time, it has been translated into almost every known language. While researching this hymn, I stumbled on a beautiful version sung in Korean. The most widely used English translation is by Frederick Henry Hodge in 1852.

Luther believed the singing of hymns to be significant in motivating the believer. The Bible was God speaking to man; hymns were man speaking to God. “I would allow no man to preach or teach God’s people without a proper knowledge of the use and power of sacred song.” He was a musician himself, playing the lute and paying his way through school by singing on the streets of Eisenach. Yes, Luther was a street performer! And he was a prolific hymn writer, composing 37 hymns.

Luther wrote this hymn during a time of great opposition by Emperor Charles V. Psalm 46 often brought him comfort in those days, and thus this great hymn, based on Psalm 46,  was born. Throughout his life and struggles, Luther would turn to his friend Philipp Melancthon and say, "Let's sing the 46th Psalm".


About this hymn, Luther himself said, "We sing this psalm to the praise of God, because God is with us and powerfully and miraculously preserves and defends his church and his word against all fanatical spirits, against the gates of hell, against the implacable hatred of the devil, and against all the assaults of the world, the flesh and sin.”

Bach used the words to this hymn as part of his Cantata No. 80 for the Reformation Festival, probably in 1715. It, too, is beautiful.