When we were in Manila in the Philippines, we toured the Intramuros, the old part of the city. Surrounding the inner part of the city is an eight foot thick wall built by the Spanish conquerors in the 16th century. On the edge, overlooking the mouth of the Pasig River, stands Fort Santiago. 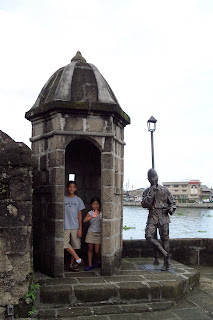 This imposing stone fort has been on guard over the city since 1590. It withstood the Luzon earthquakes of 1880 which destroyed most of Manila. The gate was heavily damaged during the liberation of Manila in 1945, but it still stands. 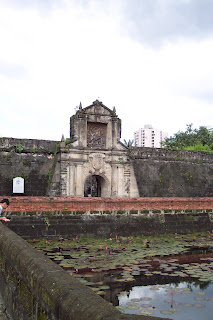 This is something of what Martin Luther had in mind when he wrote A Mighty Fortress Is Our God. The hymn is based on Psalm 46, one of Luther's favorite when he was facing trials.

1 God is our refuge and strength,
an ever-present help in trouble.
2 Therefore we will not fear, though the earth give way
and the mountains fall into the heart of the sea,
3 though its waters roar and foam
and the mountains quake with their surging

A mighty fortress is our God, a bulwark never failing.

The word bulwark from the first stanza is a great one. It sounds strong, doesn't it? Our God is stronger and mightier than any bulwark. Even when the imposing mountains fall into the sea, he'll be with us. When the earth moves beneath us, he is steady and sure. Through the roughest of life's storms, he will not leave us.

Though this world with devils filled should threaten to undo us, we will not fear for God hath will, his truth to triumph through us.

Fort Santiago has remained standing through some very difficult times. Floods, earthquakes and war have threatened it for centuries, yet it looks triumphantly over the city. The stronghold has withheld water and enemies. An earthquake was no match for the thick city walls. So is our God. There will be trials, temptations and persecutions throughout our lives here on earth. More than once, Luther felt that all had been lost. He battled depression and despair, but the Lord used these times to bring triumph from disaster. His grace and mercy proved to be sufficient for Luther. When he cried to the Lord with the words of Psalm 46, the Lord was gracious to him.

8 Come and see what the LORD has done,
the desolations he has brought on the earth.
9 He makes wars cease
to the ends of the earth.
He breaks the bow and shatters the spear;
he burns the shields with fire.
10 He says, “Be still, and know that I am God;
I will be exalted among the nations,
I will be exalted in the earth.”

And Luther speaks in the hymn of the final triumph. The Prince of Darkness grim, we tremble not for him; his rage we can endure, for lo, his doom is sure; one little word shall fell him.

Our associate pastor referenced this hymn in a recent sermon. He wondered what is the one little word that shall fell Satan? Interesting question. We don't know for sure what Luther had in mind, but we can take a stab at it. In John 19:30 we read, "When he had received the drink, Jesus said, “It is finished.” With that, he bowed his head and gave up his spirit." In Greek, it is finished is one word. The final word. As Jesus spoke those words, his work on earth was finished. Satan had been conquered. Christ had vanquished sin and eternal death. The Enemy has been subdued and at the last day will be thrown into the lake of fire forever. There is our ultimate hope in trial. There is our supreme consolation. There is our ultimate victory.
Posted by Liz Tolsma at 8:00 AM

Email ThisBlogThis!Share to TwitterShare to FacebookShare to Pinterest
Labels: A Mighty Fortress Is Our God, Martin Luther, Psalm 46