The Story Behind Nothing but the Blood of Jesus

This hymn has obscure beginnings. We do know that it was written by Robert Lowry, a well-known hymn writer, in 1876. Lowry, a Baptist minister and professor at Lewisburg (Bucknell) University, wanted to be known more as a preacher than as a hymn writer. He would have rather preached a sermon to an appreciative audience than to write a hymn. Yet, more than 100 years after his death, what Lowry is best remembered for is his many popular and well-loved hymns. Nothing But the Blood of Jesus is among these. 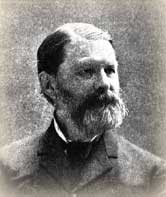 Nothing But the Blood of Jesus was first introduced at a camp meeting in Ocean Grove, New Jersey. Ocean Grove was established in 1869 as a place of spiritual retreat and revival and a place to escape the summer heat of northeastern cities. Over the years, many famous hymn writers came to Ocean Grove, including Fanny Crosby, William Kirkpatrick, and Eliza Hewitt, as well as Robert Lowry. Ocean Grove still hosts many famous preachers and speakers, as well as musical artists.

Email ThisBlogThis!Share to TwitterShare to FacebookShare to Pinterest
Labels: Nothing But the Blood of Jesus, Robert Lowry