The Story behind Rejoice, the Lord Is King

The text for this majestic hymn by Charles Wesley first appeared in his brother John's book Moral and Sacred Poems in 1744. In 1746, Charles published it as one of 16 selections in Hymns for Our Lord's Resurrection. It originally had six verses. 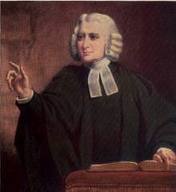 The hymn is based on Philippians 4:4. "Rejoice in the Lord always: and again I say, Rejoice." The early Methodists experienced much persecution and hardship and Charles wrote this hymn, based on Paul's words penned while to prison, to encourage them.

The composer of the tune most associated with the hymn, John Darwall, first published the tune with the words of Psalm 148 in 1770. G.F. Handel wrote a tune specifically for this hymn in 1750 and published in 1826 by Samuel Wesley, Charles' son.